The Future of the High Street

At the end of February this year the British Retail Consortium issued its report “Retail 2020: Fewer but better jobs” (BRC, 2016). The study forecasts that there could be up to 900,000 fewer jobs in retail by 2025. This was in part due to the increased national living wage that would accelerate changes that retailers will be required to make to mitigate rising cost pressures.

The national living wage is probably just the latest pressure on retailers. There is an on-going structural change in shopping behaviour that has been identified and commented on for some time. The Distressed Town Centre Property Taskforce, reporting back in 2013, considered the combined forces of economic downturn leaving people with less money to spend at a time when the availability of the on-line shopping became largely ubiquitous, changing not only the market share but also the way people shop as well. This has led to there not only being too much retail floorspace overall, but the smaller fragmented units found in town centres not of the scale that were offered in out of town locations. It has been these larger units that the major multiples wanted.

Research at that time from the Javelin Group suggested that by 2020 the impact of declining in-store sales would result in a loss of 31% of High Street stores.

The BRC report does little to change that position. Their research shows that the retail industry is facing a significant uplift in costs. On top of the increased wage bill from the National Living Wage, retailers can expect increased business rates and additional costs from the apprenticeship levy. For the larger retailers, falling technology costs will offer scope to reduce headcount through automation and other productivity improvements across the supply chain. The concern is that for the smaller retailers such options may be more limited.

With a large number of retail leases reaching their term in the next five years, BRC predict a significant reduction in those being renewed. Moreover they consider that the impacts will be focused in High Streets in the weaker economic areas; High Streets able to model themselves as higher-end destinations may find themselves largely untroubled by the rising costs of business or structural change.

What is perhaps key for the business community is to recognise these structural changes and pressures as the principal drivers behind the diminishing viability of their traditional retail centres. This is pertinent to parking within the town as often it is perceived that the parking offer, and in particular parking charges, are fundamental and responsible for the decline occurring. 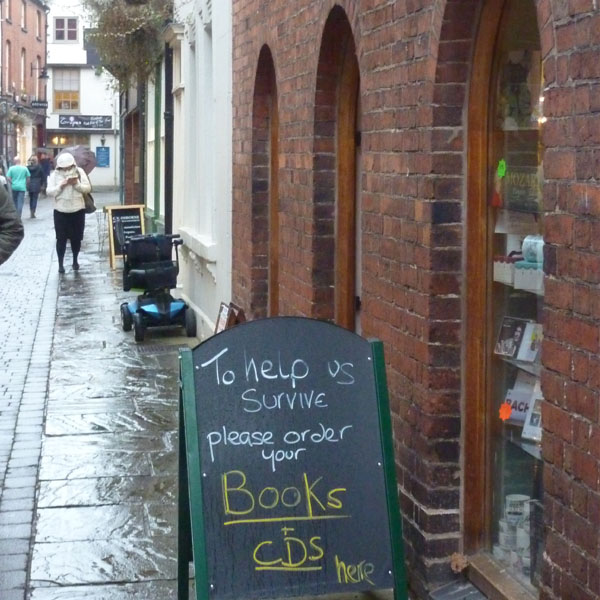 When 127 shoppers were asked in 2013 in St Helier, Jersey, why they had used the internet for their last on-line purchase rather than coming to the shops, 83% gave as their primary reason that the item was either not available or the range on the internet was better, or it was less expensive on-line. Despite both being available options, no-one in St Helier said that their primary reason for not using a bricks and mortar shop was because of the cost or parking or lack of parking (Potter, 2014).

In 2015 these questions were repeated in Grimsby. The lower cost of the internet was far less striking, but range and availability again were notable, accounting for 72% of the primary reason given. Indicative of the change in way people are shopping, a strong response came from those using the internet because it was open when the town centre wasn’t (6 responses; 14%). From all interviews, only one respondent indicated that it was the cost of parking that had been the primary factor.  Out of Town Shopping

Undertaking the same questioning about out of town shopping, the people of Grimsby provided a similar theme. 77% chose out of town because of availability or range. The cost of parking continued to be a small factor. As seen with on-line sales, the extended opening hours proved to be the next most important factor. Amongst other options the cost of parking did not feature highly.

When asked directly the more specific and leading question as to whether free parking in the town centre would have changed the purchase from to town centre, a larger number said it would. However twenty eight out of the forty (70%) responding said it would not.

So is parking policy irrelevant to the survival of the town centre? Parking availability will remain a key part of making a town or city centre attractive to those that want to drive. But parking, and access by car must be put in context. Good parking, perhaps lower prices may influence a few. If people want to go somewhere however the cost of parking is generally little more than an after-thought. It may be a grudge payment, but it doesn’t immediately change destination choice. If town centre shops are closing, it is unlikely that the parking charges or availability are the cause, nor the solution. 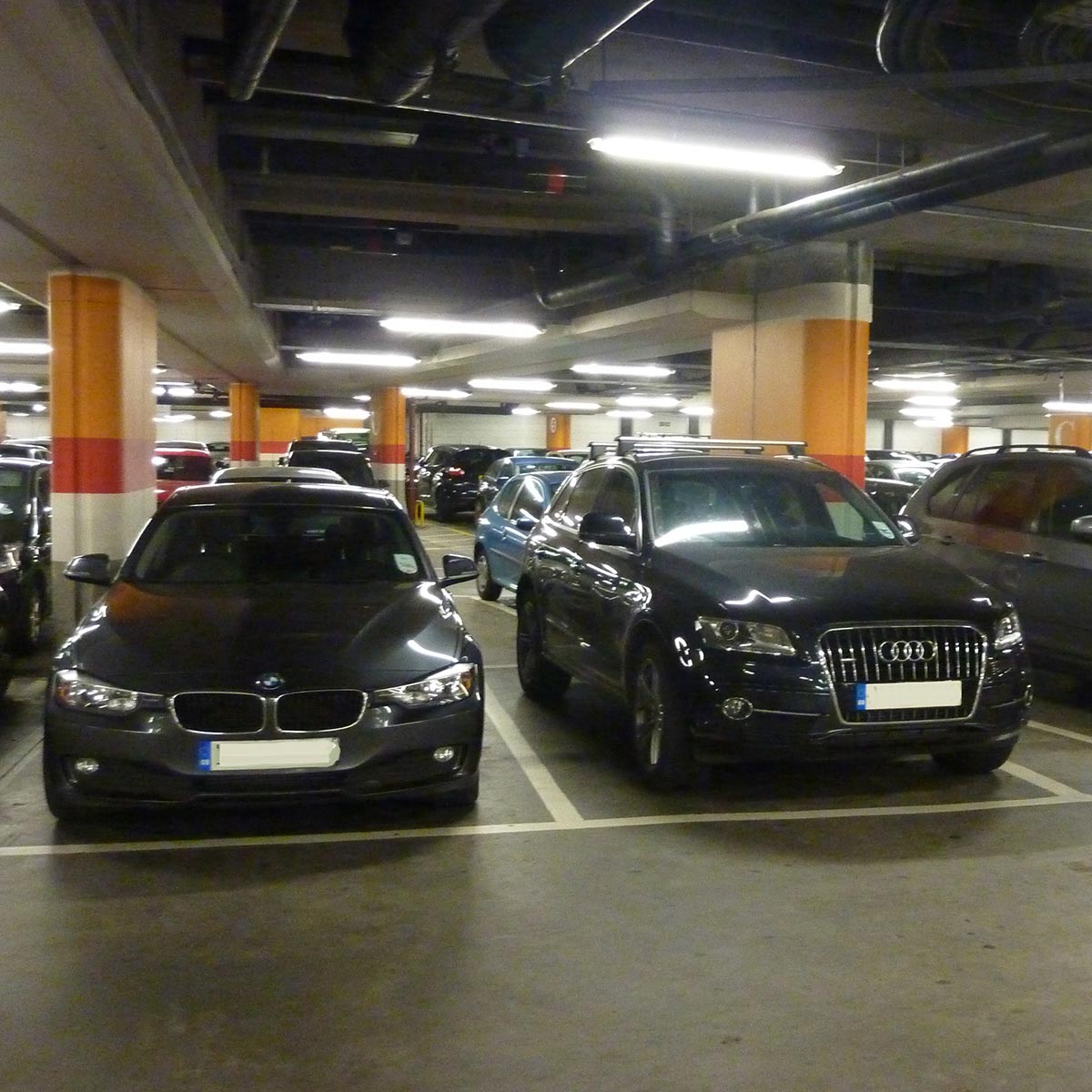 Current practice states that a desirable occupancy rate is typically around 85-90% for on-street parking. This creates the optimal balance between ensuring that those wishing to visit shops and businesses can find somewhere to park while maximising the remaining use of for those that are already in town doing business. The cornerstone of Performance Pricing, the concept promoted by the economist Becker and more recently Shoup, is based on adjusting the tariff paid to park based on expected demand to achieve the 85-90% occupancy at all times. At times and locations that demand has historically been high, the price to park is increased and where there is high availability, the price is reduced. Locations that adopt Performance Pricing do not change the tariff in . Changes are made at set times at regular intervals based on historical data. These changes are advertised and are incremental to progressively bring about changes in use.

While San Francisco used parking bay sensors to determine parking occupancy there a range of solutions being used in other cities and under development to establish a measure of occupancy and thereby inform price changes under Performance Pricing.

A solution for towns in the UK may be to introduce performance pricing or its concept for its on-street parking. In a measure of ideal occupancy is determined for each location (typically 85% but there is evidence to suggest variations on this are sensible) such that there is always availability. Observations are made (or accumulation data collected) such that the tariff for the car park is periodically changed to achieve the ideal occupancy for different time across different days.

Many locations in San Francisco have gone down in price compared to before Performance Pricing was introduced. In Los Angeles, performance pricing has seen overall revenue increase by less than 2% since its introduction. Once the rules are agreed, it is that sets . This negates any accusations that the price has increased to address some budget . 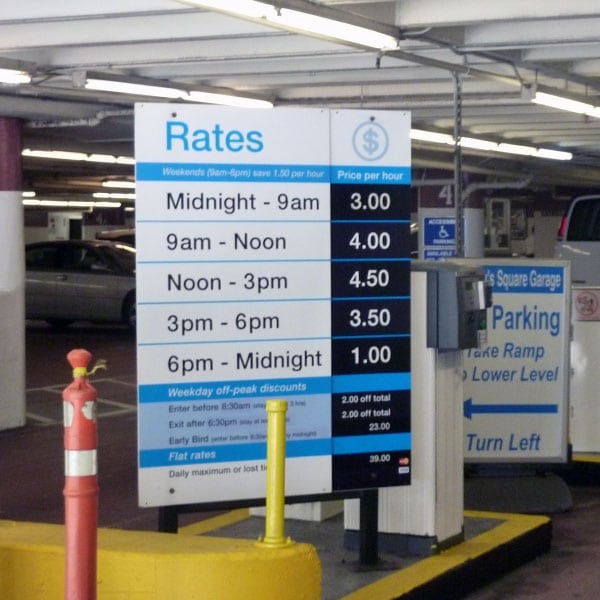 Ultimately this approach ensures availability which has been shown to be key for shoppers. A user that wants to go into town and park at a particular location to pick up a washing machine knows that they will get a parking bay near the place they need to. They know that the cost to park at that location may not be the cheapest available, but it will be available and for them is the best option given their needs at that time.

Overall however, regardless of how good the parking offer, travel, and subsequently parking, are derived demands. They arise because of some other activity. In terms of the commercial viability of a retail area, “the success of a shopper’s car park is entirely a function of the success of the tenants in the centre. A very successful centre will generate more traffic and hence parking demand than a centre with poor tenant mix” ( 2002b).

The Changing Role of the Town Centre

Twenty or thirty years ago the town centre was the focus for shopping activity. The availability of goods offered, the range and price, was then as it is now, important. Those visiting a town centre by car or other modes, sought convenient access.

The town centre was characterised by the sale of goods.

In recent years, the sales of goods and in particular the sale of larger goods, has moved out-of-town. More recently the internet and home delivery has become a significant market-place for the direct purchase of goods.

For those towns that have seen increases in urban living, the proportion and frequency of those accessing the town by non-car based modes has also increased.

Moreover, the town centre is increasingly less of a destination for buying goods as much as somewhere that people spend time and leisure. It is itself a destination. They go there for the experience. Retail space that once sold hardware or other everyday goods is now selling services in the form of nail bars or hair salons. The High Street has seen a change of use to restaurants and coffee shops providing the urban fabric for people to relax, socialise and enjoy leisure time outside the home.

While the High Street has and will see significant decline in its current form, as a destination to a new kind of experience it offers something different that is not necessarily provided elsewhere.

This new form of service industry also presents considerable promise for the local economy. Money spent in coffee bars or on services may be able to achieve higher margins than more competitive comparison goods shopping. Also, because a larger proportion of the sale price is consumed by staff wages, more of the money spent stays in the local economy. 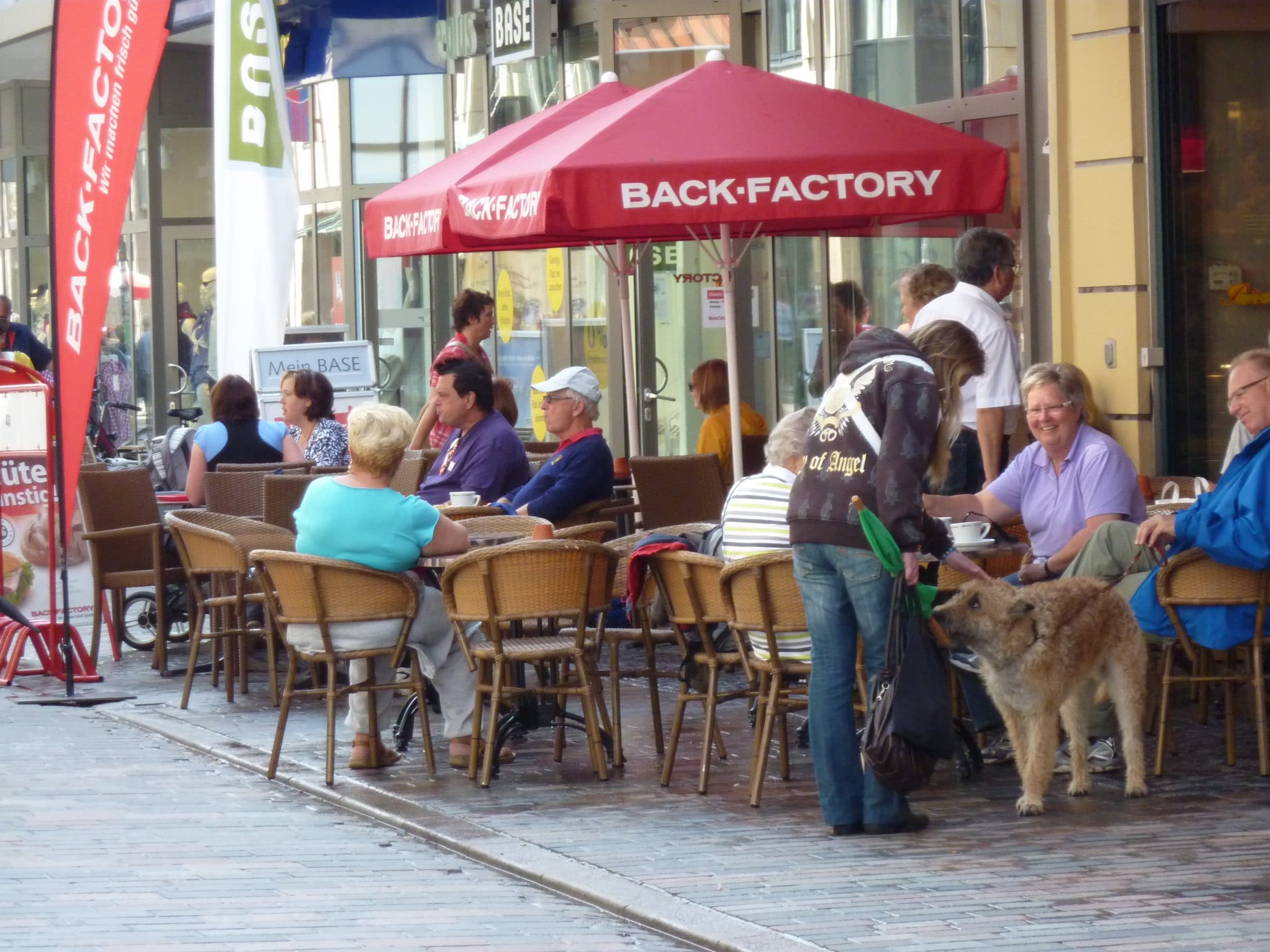 The town centre as a place to socialise. 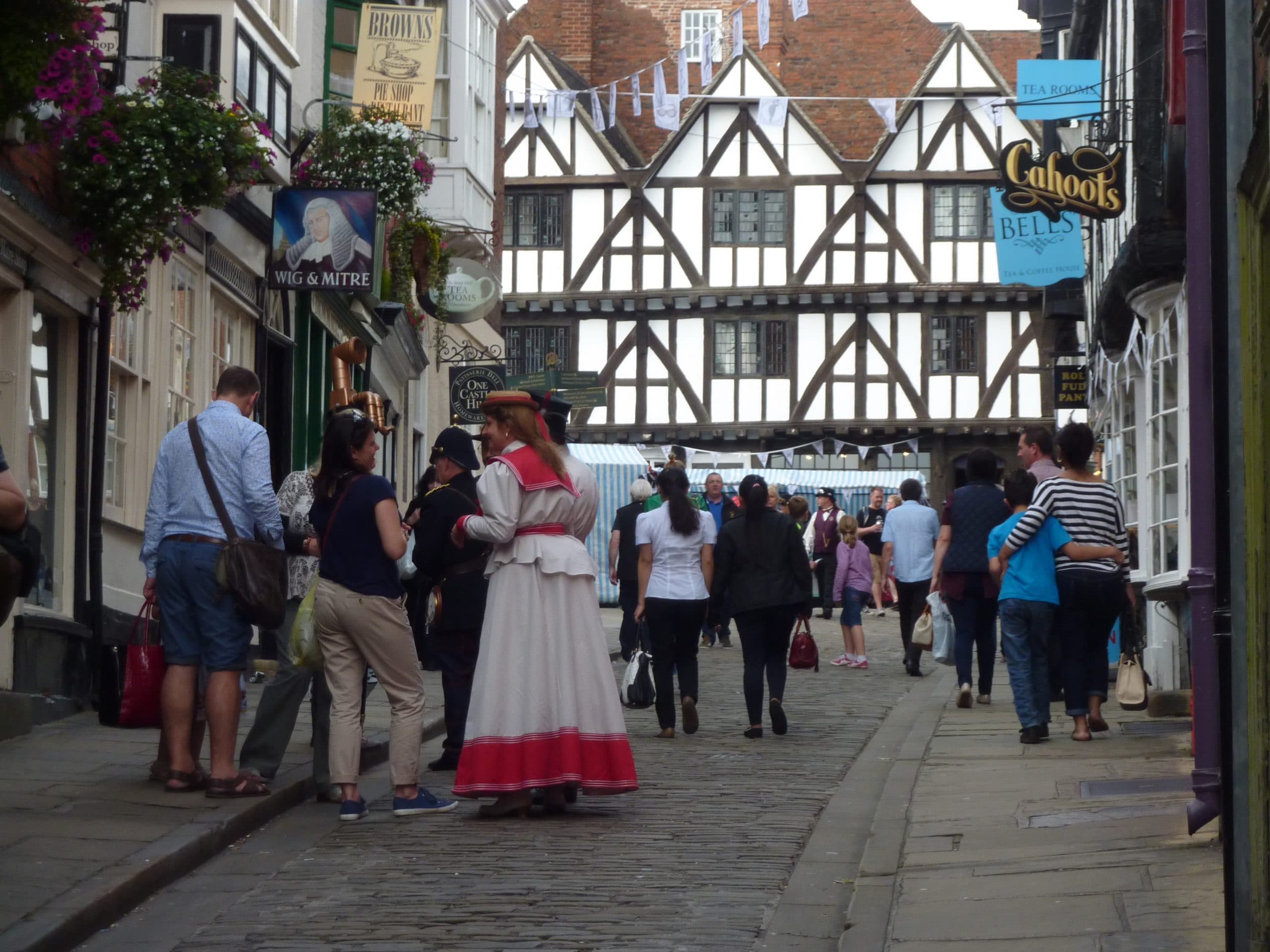 The over-riding change is that more people are coming to the town centre to spend time. For those destinations offering the right environment, entertainment and quality of service, dwell times are increasing.

Late in 2016, Brent Cross shopping mall in North London unveiled a £1.4 billion plan to upgrade its offer. When Brent Cross opened in 1976 it had just two cafés on the site. When the upgrade opens in 2022, it will have as many as fifty food options including street food stalls in the main thoroughfare, a cinema complex and a hotel. Recognising that shopping centres are destinations to spend leisure time, opening hours are expected to extend as late as midnight (Evening Standard, 2016).

Recognition of these new trends in how people spend their leisure time is influencing the increased prominence and quantity of food and beverage outlets in shopping malls as well as the linkage at the mall to restaurants, bowling, cinema and other entertainment facilities.